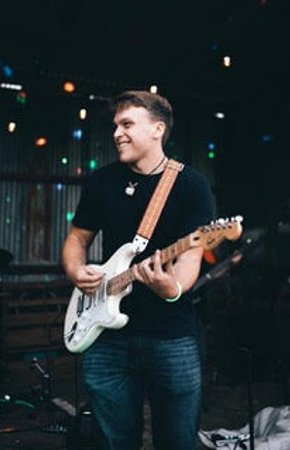 Tyler Craig is a guitarist and music educator who lives in Livermore, California. He grew up in a musical family where he began learning at the age of 12. From there, he took private guitar lessons learning all about the electric guitar, and studied classical guitar throughout high school and college. He has participated in numerous groups such as performing in guitar ensembles, accompaniment in orchestras, playing and touring around California with a band called Crowned In Chains, leading guitar and music at his church, and performing solo classical pieces. He has performed in many classical guitar competitions earning first in three separate competitions. Currently,  he continues to grow in his musical practice and art by accompanying musicals and performing with bands at various venues.

Tyler Craig is taking classes and working on completing his Bachelor’s degree at California State University East Bay. Tyler began teaching private guitar lessons at the age of seventeen and has continued since then. He finds the art of teaching music highly rewarding for not just him, but also the student. Tyler believes that every student’s personal interests and ideas lead them in how they learn. He will intentionally craft a personalized lesson plan for each student that they find enjoyable and rewarding. His goal is to inspire each student to grow in their instrument and help play a part in the discovery of their passions.