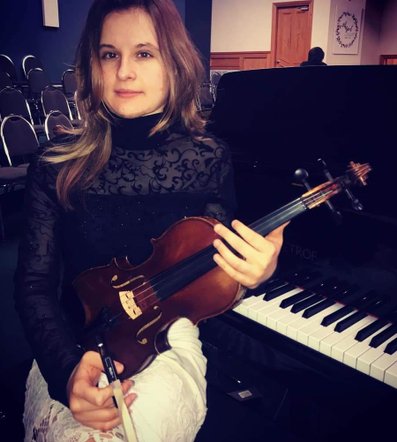 Viktoriya has seven years of teaching experience; she was working at the California State University string project program, George Washington High School, and taught privately. Viktoriya is working with people of all ages and believes that anyone can learn how to play the violin regardless of their age. Viktoriya focuses on the technical quality, sound production, intonation and hand posture. She enjoys teaching and can find the approach to any student

Viktoriya Sinitsa graduated with a Bachelor of Music Performance from California State University, and is currently pursuing her last semester of Masters in Music at the San Francisco Conservatory of Music. Viktoriya was born in Kazakhstan, she started to take piano lessons at the age of four and violin at the age of eight. When she moved to the United States she became actively involved in performing at the festivals of Russian, Spanish and Baroque music, as well as attending masterclasses with worldly known musicians. Viktoriya performs in many ensembles of different musical genres, such as: Baroque ensemble, symphony, opera, and jazz. In 2018, Viktoriya with the California State University jazz ensemble won a third place at the Monterey National Jazz competition, and is currently performing at political and concert events around the globe with the Jazz Symphonia Phonotone. Three years ago, Viktoriya established her own youth symphony orchestra, where she currently conducts and trains young musicians.